Among our competences is the simulation of precipitation evolution in various polycrystalline and single-crystal, wrought and cast Ni-base superalloys. For instance, we tackle the role of primary precipitates, formed during casting, and evaluate the particle distributions of multimodal precipitation. Further, we can propose processing parameters such as proper homogenization times. Based on our precipitation simulations, we are able to predict materials properties such as yield strength, as well as the microstructural evolution of the material.

Some examples demonstrating our competence in the Ni-base superalloys process simulation include:

Solidification of Ni-based alloy IN718 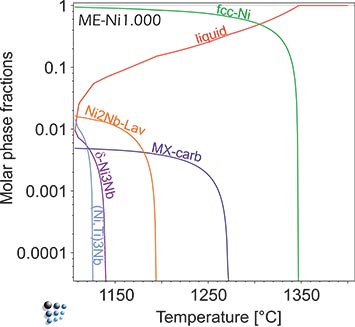 Figure 1: ME-Ni prediction of primary phases formed during continuous casting of Ni-base superalloy IN718. Laves-phase (Ni,Cr,Fe)2(Nb,Mo) forms as primary particle due to segregation. In equilibrium, this phase is stable in a narrow temperature range around 1000°C in IN718.

On some occasions that the material is not homogeneous or by typical examples of the cast materials with microsegregation, the existing composition gradients in the system can be disappeared with various time-temperature process cycle(s). Depending on the target, it might bring advantages or disadvantages for the material. It is possible to predict in advance the outcome and consequence of the process cycle(s).

With available data for chemical potentials and mobilities of the system components, the diffusion processes leading to the microstructure homogenization can be simulated. The concentration profiles for various annealing times at various temperatures can be estimated. Moreover, it is possible to perform the precipitates kinetics simulation in this changing environment to realize the consequential microstructural evolution.

Homogenization of Ni-based alloy PWA 1480: We use our thermodynamic and diffusion databases in “cell simulations” to predict requirements of homogenization heat treatments of cast alloys. The results of these “cell simulations” with ME-Ni database represent, for instance, the development of temperature-dependent element diffusion profiles between dendrite core and interdendritic area of a cast single-crystal Ni-base superalloy as a function of annealing time. 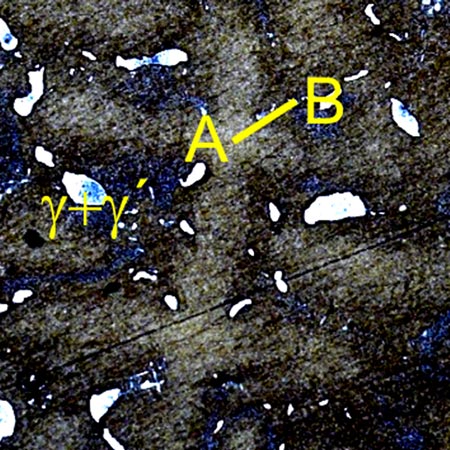 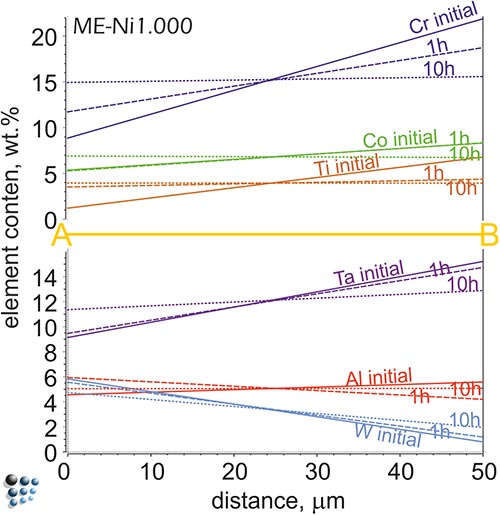 The metallographical picture of the PWA 1480 alloy structure with etched dendrite structure (bright cross-shapes) cut along (001) of the fcc matrix structure. A one-dimensional diffusion profile along the A-B cross-section simulated with MatCalc for the sample homogenized at 1300°C for various time periods are shown below. Sample is homogenized after 10 hours. 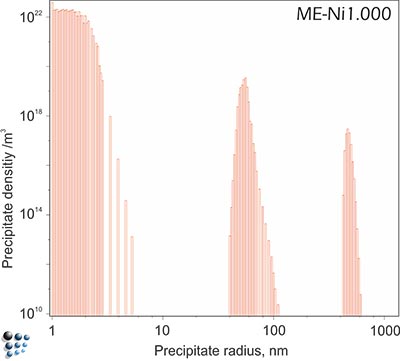 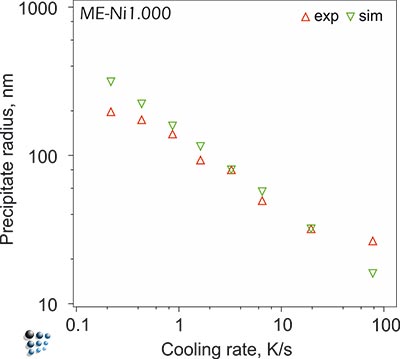 Yield strength evolution in Allvac 718Plus 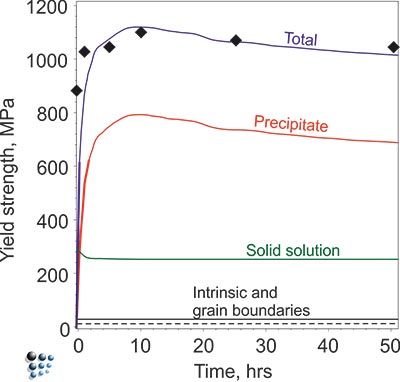 Figure1: Evolution of total yield strength of a solution-treated technological Ni-base superalloy due to γ´ precipitation during isothermal aging. Lines are simulated, symbols are from experiment. 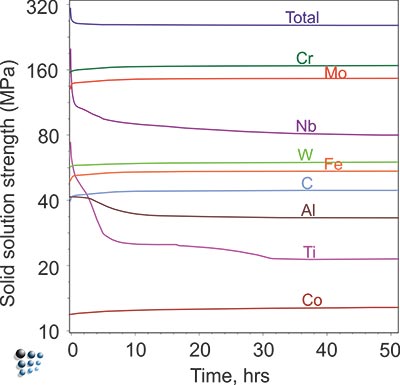 Fig. 1 shows a TEM bright field overview of a single crystal creep resistant superalloy with coherent cuboid γ’-precipitates. The size, shape and aspect ratio of these secondary precipitates are characterized. 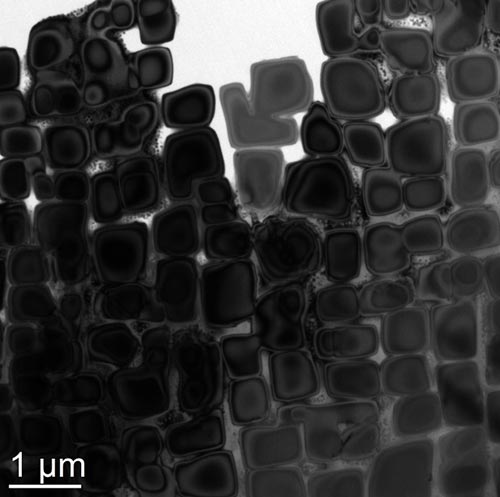 The use of electron diffraction and dark field imaging reveals tertiary precipitates in the channels between the secondary cuboids (see Fig. 2). 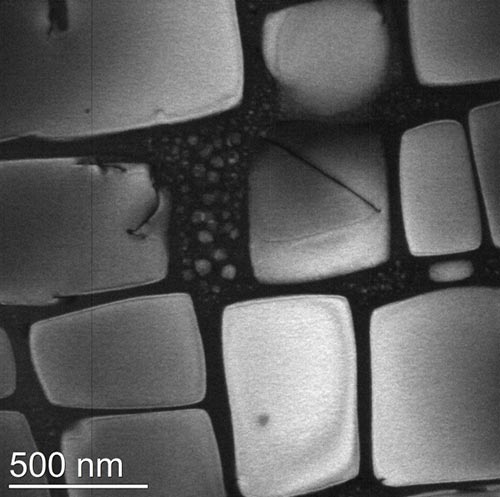 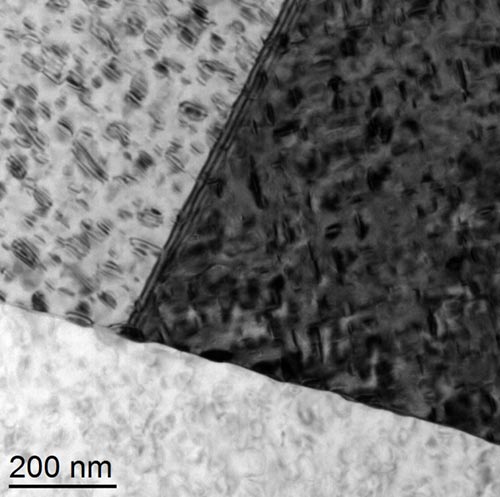 Using electron diffraction (Fig. 4) the precipitates are identified as γ’’. The strong diffraction spots belong to the Ni matrix, the weaker spots result from the γ’’ precipitates. 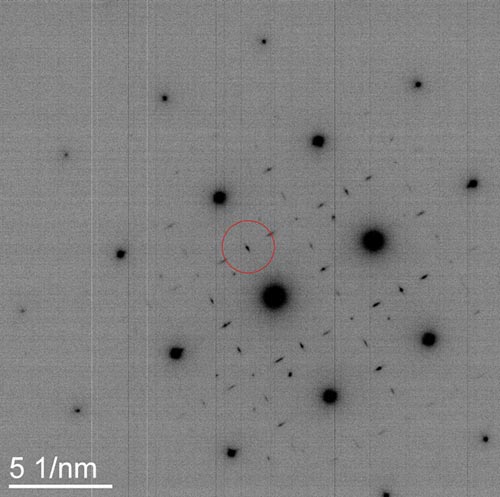 Figure4: Diffraction pattern of the dark grain in Fig. 3. Weak diffractions spots between the strong ones (Ni matrix) are related to the γ'' precipitates.

Fig. 5 shows a TEM dark field image using the diffraction spot marked in Fig. 4. All precipitates have bright contrast and allow the obtaining of local number densities and volume fractions. 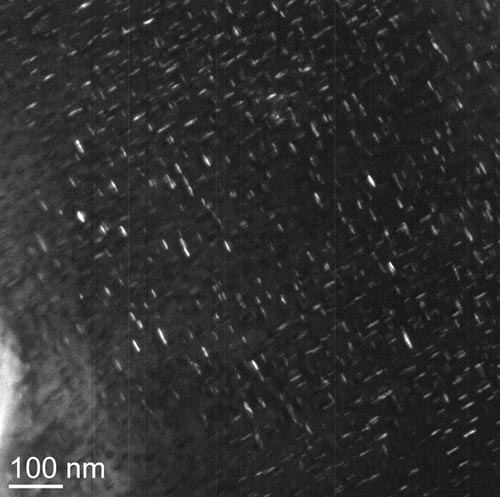 High Resolution TEM (HRTEM) imaging in Fig. 6 is used to detect coherency, strain fields on the interface between matrix and precipitate and crystal defects. 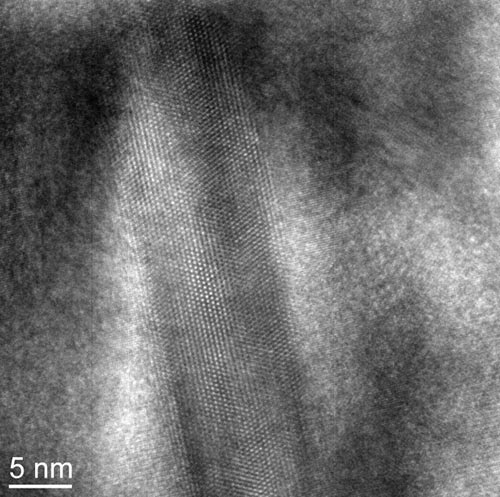 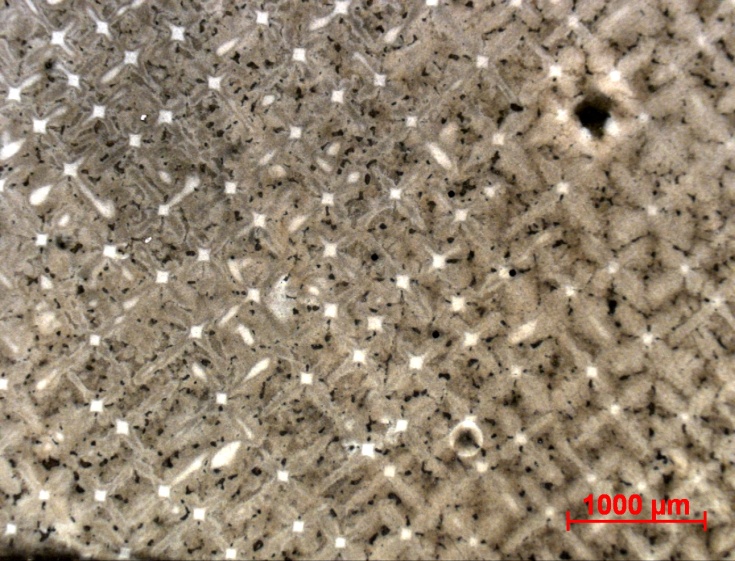