Metastable precipitate phases play an essential role for strengthening in Al-alloys. Our thermodynamic database ME-Al includes the thermodynamics of these technologically relevant phases such as co-clusters, GP-zones and strengthening β´´-phase. Differential scanning calorimetry (DSC) is an experimental standard procedure, which gives qualitative information on precipitate formation during thermo-mechanical processing.  We can simulate the heat flow during technological heat treatments, by taking into account frozen vacancies during quenching. Beyond the calorimetric feasibility, our simulation simultaneously delivers other relevant precipitate properties such as number densities and precipitate radii during the precipitation evolution.

Some examples demonstrating our competence in the aluminium alloys process simulation include: 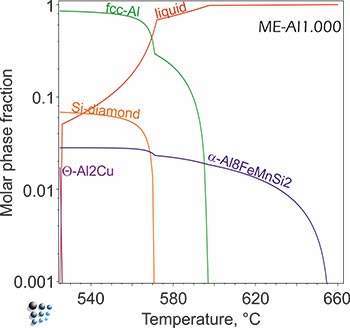 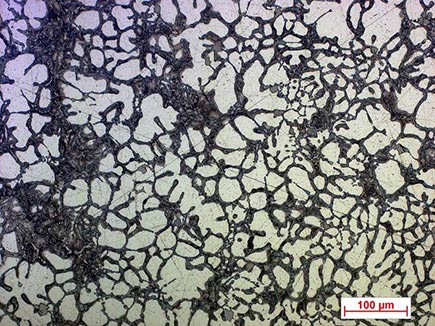 Figure: Applying Scheil simulation with our thermodynamic database ME-Al (left), we can identify the primary precipitates in as-cast Al-alloy (SEM-image of dendritic microstructure of AA319, right).

We can predict nucleation start temperatures during continuous cooling from solid solution based on thermodynamic modeling, e.g. evaluation of discontinuous heat flow due to precipitation of metastable precipitates in Al-alloy AA6016 during continuous aging, simulated with ME-Al database. 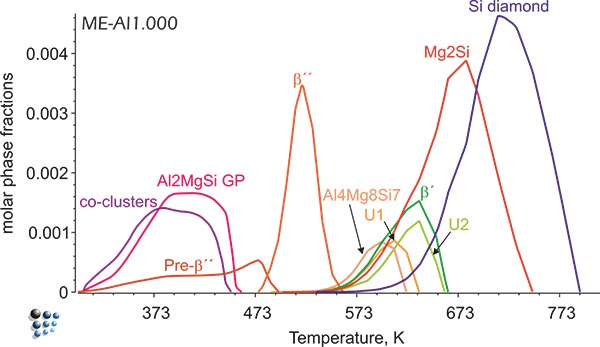 Figure2: Simulated fractions of precipitates in Al-alloy during continuous aging.

Rod shaped metastable precipitates (see long lines in Fig.) in an AA6xxx were characterized by means of their distribution, size, orientation and shape factor. Thickness measurements of the observed volume allow the estimation of local particle number densities and further their volume fractions. On the right edge of Fig., a grain boundary pinned by dispersoids is visible. The size and the chemical composition (EDX) of these dispersoids as well as the size of the precipitation free zone (PFZ) can be measured. The blurred dark lines and regions are bending contours and thickness fringes of the Al-matrix and are the consequence of the diffraction contrast. All this knowledge gives a qualitative and quantitative insight into the material and allows a better setup of simulations and the optimization of ageing processes. 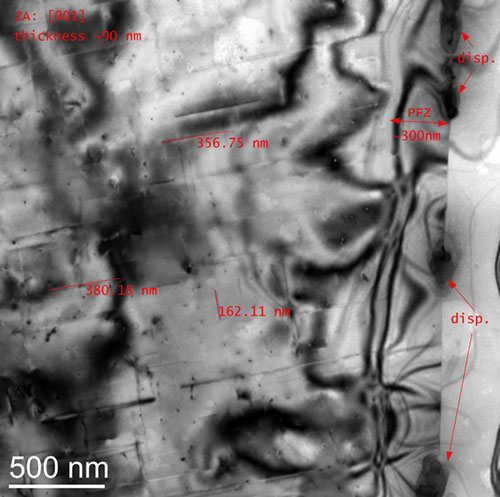 Rolling and extrusion of Al changes completely the microstructure of the material. The microstructure has a strong impact on the macroscopical properties of the final product. Deformation, recrystallization and recovery are the main processes occurring during and after rolling. With Electron Backscatter Diffraction (EBSD) we can measure grain sizes, aspect ratios of grains, textures, crystallographic orientations of single grains and recrystallized fractions over areas up to several square millimeters. In the particular case, an inverse pole figure of a rolled Al alloy is shown in the figure below. Elongated grains with different crystallographic orientations (colors) are visible. The arrangement of the elongated grains results in a rolling texture. Further quantitative analysis gives values for mean grain size, aspect ratio, texture, recrystallized fraction and more. 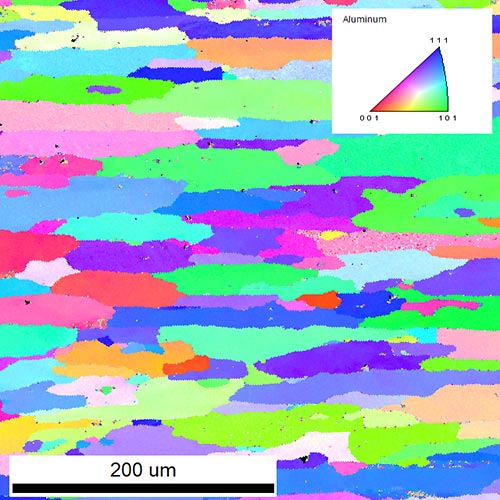 Al-Mg-Si alloys are widely used as age-hardenable alloys. The main hardening contribution comes from the precipitates formed in the material. As the diffusion processes depend on the vacancy amount present in the system, it is important to have some insight into the vacancy concentration in order to simulate the precipitation kinetics in these systems. In case of aluminium alloys, the high cooling rates result in the considerable amount of the excess (frozen-in) vacancies so that taking the equilibrium concentration of vacancies for the kinetic simulation may lead to serious errors in the predictions of the precipitation state of the material.

In this example, the effect of quenching process on the natural ageing process in Al-Mg-Si alloy is discussed. The alloy is solution annealed and, afterwards, quenched in two ways. The first way is a standard water-quench to room temperature (treatment P1). The other way is to quench in a low-melting alloy at 160°C, hold it at this temperature for two minutes and, subsequently, quench in water to room temperature (treatment P2). Figure 1 shows schematically the treatment features. 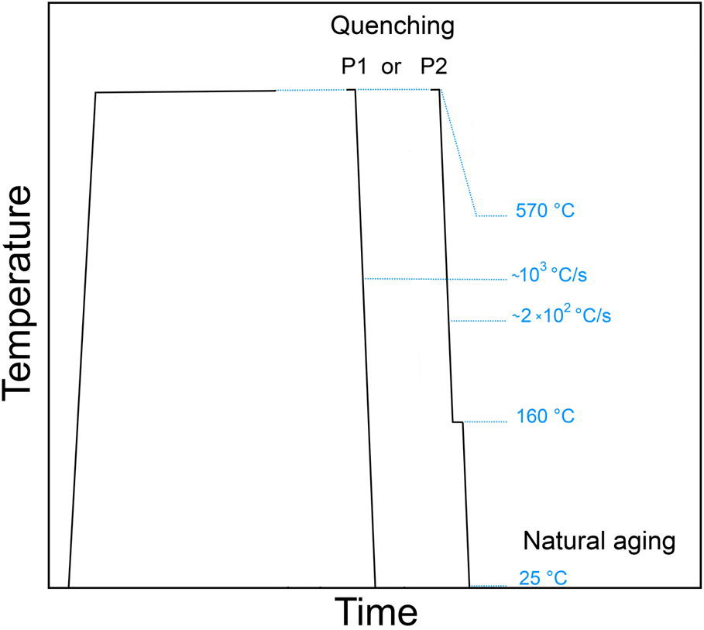 Differences in the precipitation kinetics were observed for these treatments. The resistivity measurements (Fig. 2) show a clear change of the sample state treated with P1, while no such behavior is observed for the sample treated with P2. The atom probe tomography (APT) analysis shows also differences in the amount of clusters found (Fig. 3). The cluster distribution of P2 sample is identical with the random distribution (except of a single precipitate which seems to be found by chance), while the sample P1 shows indicates clustering. 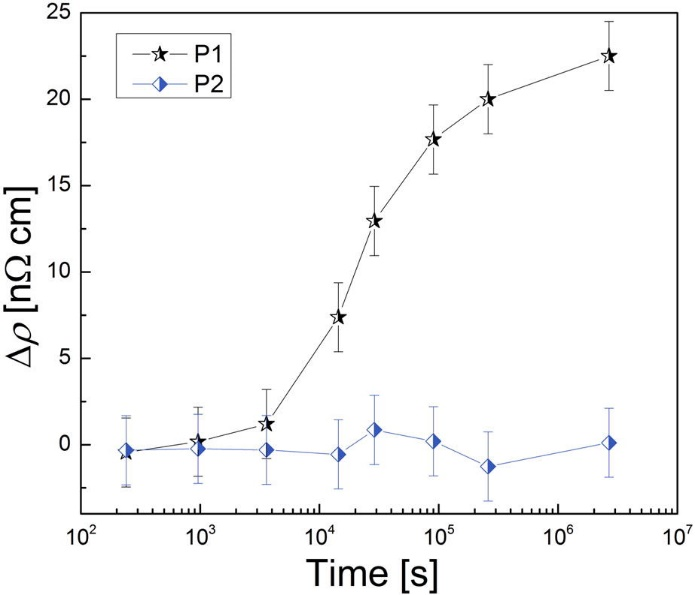 Figure3: Results of the Atom Probe Tomography measurement of the samples stored at room temperature after various heat treatments. The cluster analysis in the sample after treatment P1 (a) shows a remarkable deviation from the random solution model. The results of this analysis in the sample after treatment P2 (b) confirm the random distribution of the solute atoms with an exception of a single heterogeneous precipitate was found.

The way in which these heat treatments result in the different behavior is revealed when the evolution of the vacancy concentration is analyzed. On one hand, the equilibrium vacancy concentration at room temperature is the same for both of the samples and it does not provide any explanation for the different outcomes. Nevertheless, the FSAK model which is implemented in MatCalc, calculates the actual vacancy concentration and it predictions (shown on Fig. 4) allow some understanding of the processes occurring in these samples. For treatment P1, the straight quenching results in the high concentration of the excess vacancies. These had not enough time during cooling to reach the sinks at which the vacancy annihilation occurs. Hence, these vacancies are available for the diffusion of the solute atoms of Mg and Si which tend to form clusters at room temperature. In case of treatment P2, the isothermal holding at 160°C is in the region when the vacancy mobility towards sinks is still considerable and the amount of the frozen-in ones is over two orders of magnitude lower than at the end of treatment P1. In result, the diffusion of solute atoms at room temperature is inhibited and the cluster formation is prevented during the measured timescale. 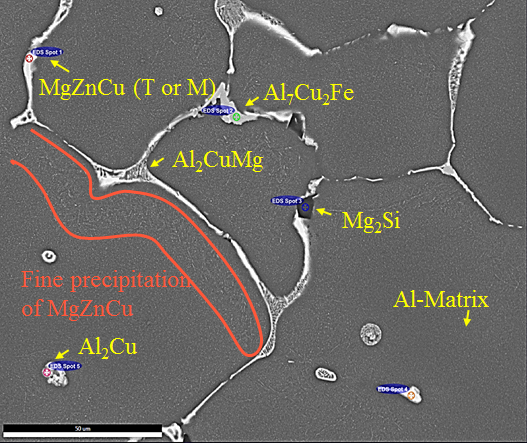 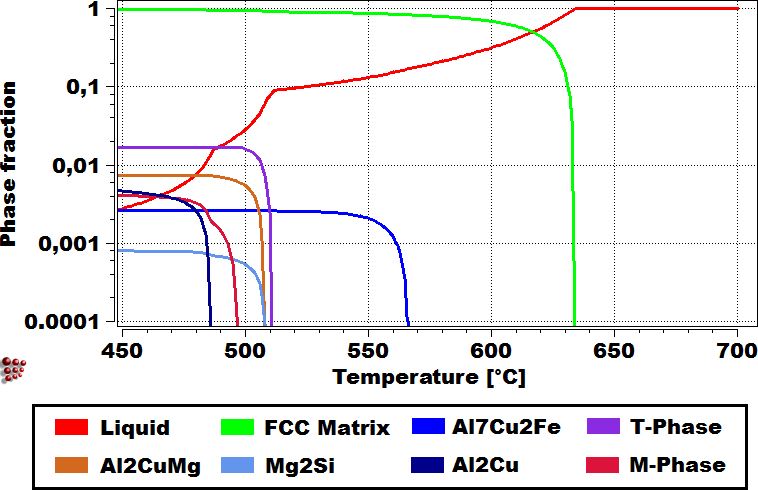 On the left, a scanning electron microscope picture of the as-cast structure of AA7050 is shown with numerous primary precipitates. On the right, the results of the Scheil-Gulliver calculation relevant for this system are displayed, which show good agreement with the experimental measurements and the predictive power of the calculations.

A scheme of the process chain for the production of aluminum alloy sheets and their relevant material characterization steps.

Last production step (ageing): A typical Al-Mg-Si alloy strengthening as a function of the precipitation kinetics during the last ageing treatment. In this simplified version just the evolution of b” phase during ageing has been shown.

An important step in the through-process modeling is the simulation of natural aging. Natural aging during storage of Al-Mg-Si alloys at room temperature after solution heat treatment and quenching can significantly reduce the maximum strengthening potential during artificial aging and, therefore, is a key topic in aluminum research and industry.

The essential models to predict the microstructure evolution during natural aging are included in Matcalc: Vacancy evolution, cluster thermodynamics, coagulation of clusters and cluster strengthening.